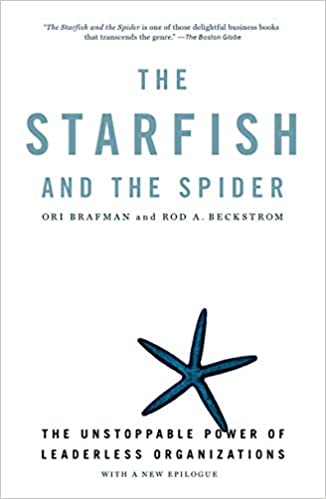 Several weeks ago, a chaplain friend handed me a book called The Starfish and the Spider: The Unstoppable Power of Leaderless Organizations. My friend said, “It’s really a great book.” This was his way of saying, “You need to bump this to the top of your reading list.” Challenge accepted.

The premise of the book goes something like this. If you decapitate a spider, it dies. If you cut off a starfish’s leg, it grows a new one, and the leg you cut off can grow into a new starfish. It’s a “heads I win, tails you lose” kind of response to adversity.

This principle plays out in the business and organizational world. Top down, centralized organizations (the spiders) can’t compete with starfish organizations. For example, the major record labels took peer-to-peer (P2P) music sharing companies like Napster to court. They won. But another P2P organization would take it’s place. The power of the starfish organizations fundamentally transformed the music industry. No longer do you have to buy a cd for $19.99 for one or two songs you liked. Now you hop on apple music or amazon music and buy the hit song you like for $1.29. So did the spiders really win? In court, yes. In the marketplace (where it really matters), no. They took beating after beating, and the game fundamentally changed.

Starfish and Spider authors Brafman and Beckstrom discuss countless other examples. Lessons range from successful Apache resistance to Mexican and American rule to the amazing effectiveness and proliferation of Alcoholics Anonymous (AA) groups.

AA is a starfish, because everyone has skin in the game, and everyone is accountable to one another. There’s not some leader lording authority over the rest of the group. As the discipleship pastor at Agape, I’ve thought about how these principles can fuel our missional community growth. When studying AA groups, Brafman and Beckstrom noted that the bond breaks down when the groups surpass fourteen members. I’ve noticed this in missional communities as well. When they get too big, the small-group dynamic of accountability, contribution, and buy-in changes and the bonds weaken. There’s a reason Jesus did life with twelve disciples instead of twenty.

For our missional communities, we’ve communicated our vision (build relationships, make the Gospel clear, serve our world), but we don’t mandate the structure of the groups. As Brafman and Beckstrom observe, “If orders come from above, the membership might follow, but they won’t be inspired to give it their all. Second, leaders in top-down organizations want to control what’s happening, thereby limiting creativity.” I don’t want us to become spiders. Jesus wants us to be disciples who make disciples. He wants us to multiply like starfish. So we give our missional community leaders guidelines such as encouraging them to develop future MC leaders and encourage spawning MCs out of their existing ones.

Arguably the most instructive part of the book for missional communities is the discussion on Toyota and GM. In the mid-1980s, Toyota took over management of its Freemont, California auto plant. It was one of GM’s worst performing plants, and the company was planning to shutter it. But GM’s leaders were intrigued by Toyota’s success and proposed they take over leadership of the plant with its existing union employees. Toyota said, “No prob.” Within three years, the Toyota run plant was among GM’s best. Quality was exceptional and productivity was 60% higher than comparable GM plants. One production manager, Jamie Hresko, was so intrigued by the results he decided to investigate and attempted to sabotage the plant. He infiltrated the work force and over the course of a month, broke rules, arrived to work late, and created safety hazards. For every violation, Hresko’s fellow team members confronted him. Management didn’t admonish him at all. Hresko was bewildered.

Toyota had found a sweet spot between starfish and spider systems. The company had created “enough decentralization for creativity, but sufficient structure and controls to ensure consistency.”

Missional communities, cell groups, community groups, or whatever churches want to call them need to operate as hybrid organizations like Toyota. We operate under a common purpose–to fulfill the Great Commission, but we (pastors) need to decentralize power. We instill vision and theological accountability, but inspire members to step up and fulfill Jesus’ command to make disciples. The Great Commission isn’t just something for pastors. Every Christian is called to action. So as pastors we monitor things like, “Are our members participating?” “Are we increasing missional communities?” “Are they spreading?”

Near the end of their book, Brafman and Beckstrom conclude, “Managing a decentralized network requires someone who can be a cross between an architect, a cheerleader, and awestruck observer…catalysts connect people and maintain the drumbeat of the ideology.”

Pastors must be the catalysts, cheerleaders, observers, participants, and architects. We lead the flock to green pastures and give them freedom to graze, meet other sheep, and invite them to join the flock. Together, we accomplish the mission of fulfilling the Great Commission.