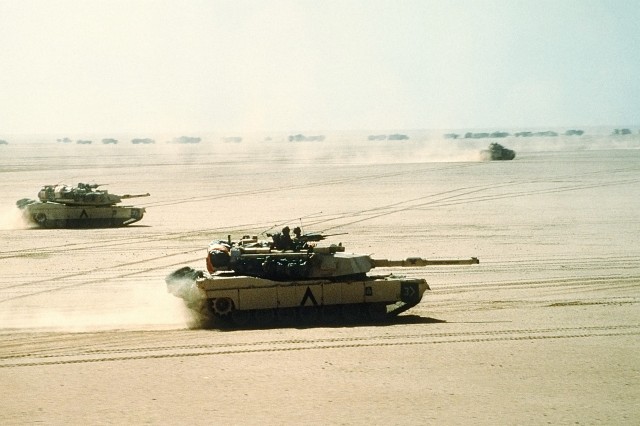 This post was originally published in February. During August, Justin is taking a break from Reflect. He’ll be back in September with fresh content. Thanks for reading!

On January 16, 1991, the US-led coalition began Operation Desert Storm. The military campaign followed Saddam Hussein’s invasion of oil-rich Kuwait. If left unchecked, the Iraqi dictator might extend his assault to neighboring Saudi Arabia, topple the kingdom, and vastly increase his control of the world’s hydrocarbons.

I remember praying for my uncle during the war. He served in 5th Group’s operations center. 5th Group is the Army’s Special Forces group headquartered at Ft. Campbell on the Tennessee-Kentucky border. They had teams infiltrating Baghdad and training Saudis near the Kuwaiti border. As a six year old, I didn’t really grasp the international implications of the war. All I knew was that Saddam Hussein was a bad man, and if he could, he wanted to hurt my family and our military. Reflecting back on that time, I realized God began impressing upon me at that young age the importance of prayer. I’m thankful my parents, particularly my mom helped reduce the anxiety we felt for my uncle through prayer.

Little did I know I would find myself in Iraq nearly 20 years later to finish the job we started in the early 90s. My mom told me I would pray for my uncle every day during Desert Storm. The biggest risk to my uncle was Iraq’s scud missiles which the Iraqis could and did lob at Saudi Arabia and Israel. Thankfully, our PATRIOT missiles intercepted most of these missiles. When I deployed to Iraq, I spent a lot of time praying. The biggest risk to our Soldiers included efps (explosively formed projectiles), which is an advanced improvised explosive device (IED). The Iranians developed and supplied Shia terrorist proxies with these munitions continuing their decades long tradition of sponsoring, training, funding,  and supporting terrorist organizations.

I watched an abc newscast of the opening moments of the conflict. Peter Jennings interviewed news correspondent Gary Shepard reporting from Baghdad. Watching the telecast I couldn’t help but reflect on how advanced technology has become. Shepard reported no live shots. He simply described what he was seeing and hearing. The extent of the abc news graphic was a map of Baghdad, Iraq and a photograph of Shepard. I also watched some actual footage of US Army apache helicopters firing the first shots of the war from the American side.

Watching these videos, I thought about the brevity of life. Less than 15 years after broadcasting the start of the operation, Peter Jennings was dead–a victim of lung cancer. The Iraqi radar operators became the first Iraqi casualties after the apache pilots destroyed Iraq’s early warning systems. God reminds us of our temporal existence often in Scripture:

“Yet you do not know what tomorrow will bring—what your life will be! For you are like vapor that appears for a little while, then vanishes.” (James 4:14)

And the Psalmist writes, “Lord, make me aware of my end and the number of my days so that I will know how short-lived I am.” (Psalms 39:4)

I highly doubt those Iraqi radar men knew the day before their deaths that tomorrow would bring them face to face with eternity. My guess is they were pretty isolated and their only “news source” was Iraqi propaganda.

Another day–another hour–is not guaranteed to us. Are you ready? Tomorrow could be the day you or I meet our Maker. Are you reconciled to God? Are you forgiven and free or held captive to sin and fear?

If you haven’t repented and put your faith in Christ, do it today! God stands ready to accept and forgive you. Salvation changes your destiny and your longevity. Eternal life versus eternal death.

Because you may not have tomorrow.

0 comments on “Desert Storm, Fear and Anxiety, and Learning to Pray”