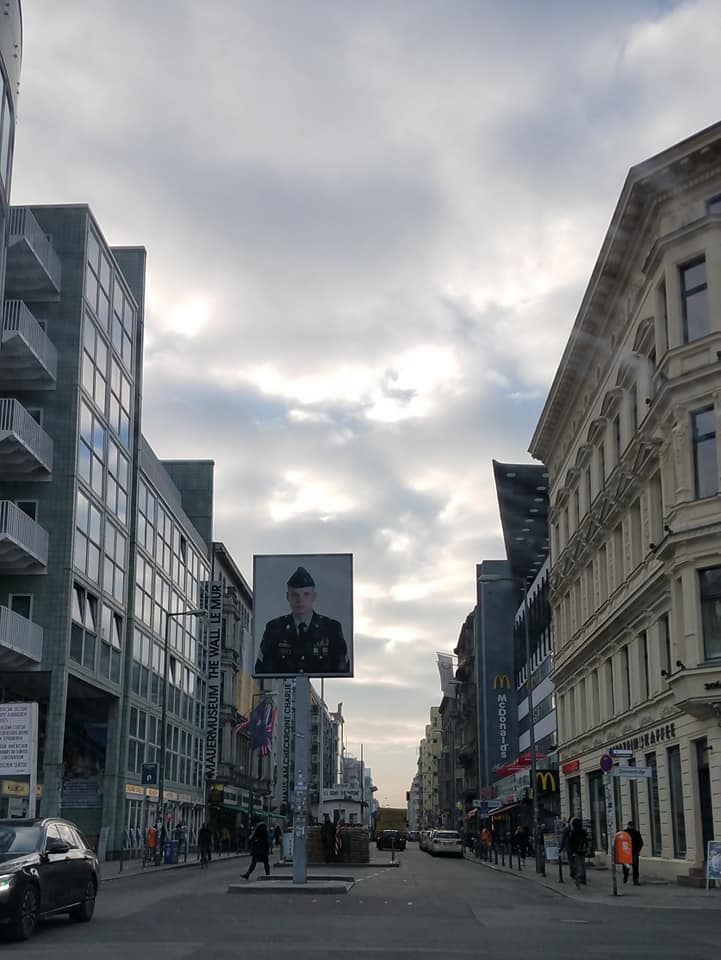 Last January, I was blessed to have the opportunity to visit Berlin. As a student of history, I relished the chance to explore the Berlin Wall museum and learn more about the historic city at the epicenter of the Cold War.

Here’s the post I wrote to my Facebook Poland group–family and friends praying for me during my deployment to northeast Poland from 2018-2019. It contains some history of the Wall and recaps my visit to Szczecin also. You’ll note my moustache in the photos. Apologies for that, but in my defense, Poland is cold.

Grace and peace from northeast Poland. This week started off fast and furious w/ an early 10-hour train ride to northwestern Poland city of Szczecin (pronounced Stetchen). I had a NATO Strategic Communications (StratCom) workshop to attend. It was a good working group involving Soldiers and airmen across the alliance. I’m hopeful some of my recommendations/suggestions work their way into NATO policy. The conference didn’t begin until Tuesday evening, so we spent Tuesday morning/afternoon in Berlin. I had never been to the German capital, and since it was only a two hour drive from Szczecin, we decided to make the trek.
It was a gorgeous day in Berlin—chilly—but sunny and mostly clear. Those conditions are pretty unusual for this time of year according to our liaison officer who lives in Szczecin and who accompanied us. When we arrived, we first went to Checkpoint Charlie next to the Berlin Wall Museum. My objectives for the day were experiencing the Berlin Wall museum, seeing remnants of the Berlin Wall, seeing the Brandenburg Gate and the Reichstag.
A couple of German military aged males dressed up as 1960s era US Soldiers were manning the checkpoint and taking pictures (for a fee) w/ tourists. Checkpoint Charlie was the most widely known border crossing between West Berlin and East Berlin, and it was also the site of a tense tank standoff between the US and USSR.

A senior US diplomat, Allan Lightner, attempting to cross into East Berlin was stopped by East German border guards who demanded to see his passport. Lightner refused to comply stating that only the USSR officials had the right to inspect his passport under a previous agreement. The East Germans refused to allow him entry, and Lightner was forced to turn back.
General Clay, the mastermind American officer behind the Berlin airlift in the late 1940s was not willing to let this offense go unpunished. He sent an armed military police escort for the next American diplomat attempting to cross over. The ruse worked, but the East Germans continued to harass American diplomats. General Clay upped the ante by dispatching M48 tanks to Checkpoint Charlie. US armor crews aimed their barrels at the East German border guards while their tanks idled loudly w/ plumes of black smoke filling the air. Alarmed, Nikita Krushchev authorized an equal number of Soviet T55 tanks to the border. For 16 hours, the tanks faced each other with WW3 threatening to break out. President Kennedy worked back channels w/ the Soviets and was able to defuse the situation. Both sides realized the potential for a world war and common sense prevailed. A Soviet T55 withdrew from the checkpoint. Next, an American M48 withdrew. This pattern repeated itself until the all the tanks had withdrawn. From that point on, American diplomats were able to transit back and forth into East Berlin unimpeded.
The Wall museum was fascinating as it documented heroic escapes from East to West Berlin. The communists erected the wall virtually overnight in August 1961. Berliners woke up to barbed wire and a wall that eventually was over 150 km in length. Families were separated. West Berlin essentially became an island of freedom in the GDR (East Germany). The Communists named the wall the anti-fascist protection wall. It’s interesting that leftists still disparage political opponents today labeling them as fascists. The GDR was worried about its survival. East Germans were fleeing to the West at alarming rates, and the GDR figured out if they didn’t stem the tide of refugees, their government would collapse.
Once the wall was erected, the GDR gave orders to border guards to shoot anyone attempting to escape to the West. Because of the wall, over 1,600 victims died. This number includes those attempting to escape from other Eastern Bloc states, the German border and Baltic Sea. The first victim died trying to jump from his apartment building (located in East Berlin) to the street below (West Berlin). One victim, Peter Fechter, an 18-year-old was shot trying to climb over the wall. His colleague escaped falling over the West Berlin side. Peter fell back on the East Berlin side. He cried out, “Help me.” But no one from the GDR did. A few West Berlin police risked their lives to hurl medical supplies across the wall. But Peter was too weak, and he bled to death.
Interestingly, some border guards escaped from the East and eventually worked at the Wall museum which opened in the 1960s by a German man who had opposed the Nazis during WW2. The German owner dedicated the museum to his friend who was executed by the Nazis for plotting to overthrow Hitler. One border guard who escaped explained that the Soldiers were in a very difficult position. Shooting or catching East Berliners attempting to escape led to extra incentives such as time off. He said that many border guards purposefully missed their targets and refused to interdict escapees. These Soldiers were still guided by a moral compass despite the immoral communist system they lived in.

I also appreciated the museum’s homage to President Reagan. There’s an entire room dedicated to his leadership and his speech at the Brandenburg gate, the historic gate to the city of Berlin, plays continuously in the room. Both President Kennedy and Reagan offered powerful moral arguments against the evil of Communism. President Kennedy famously declared, “Ich bin ein Berliner.” Kennedy was saying “I am a Berliner—I am with you!” We, who love and cherish freedom, are all Berliners. Kennedy galvanized the city and gave hope that freedom would eventually prevail.

Of course, President Reagan dropped the hammer on Gorbachev and the communists when he told the Soviet leader to, “Tear down this wall.” The way the wall came down is comical. The GDR was again in crisis, and a communist bureaucrat–newly appointed, went off-script during a press conference after a long day of negotiations. The press peppered him w/ questions, and the audience interpreted his answers as meaning East Berliners had immediate access to the west. The GDR had intended to reform the entry process into the west gradually over several weeks. Oh well. By the end of his speech, Berliners from both sides started massing at the border points. Then some West Berliners started scaling the wall and crossing into East Berlin. East Berliners were shocked to find West Berliners running through the streets announcing the news. A raucous celebration ensued. And the rest is history.
Szczecin is a beautiful city. It’s on the border w/ Germany and lies on the Oder river. Much of its architecture originated in the 1920s-30s. For centuries it went back and forth under German and Polish control. Up until World War 2, it was a German city. The Germans called the city Stettin—and still refer to it by this name. It was the 3rd largest German city by land mass behind Berlin and Hamburg. Much of the city’s architecture was destroyed in the war, and afterwards, German citizens were expelled by the hundreds of thousands. Szczecin returned to Polish control following the war. I fought a cold much of the week and didn’t feel good enough to get out and really explore the city. It was also very cold, but the city doesn’t get as much snow due to its proximity to the river and Baltic Sea. The ideal time to visit this historic city would be April-October.

0 comments on “Reflecting on My Visit to Berlin”